New romance? Hailey Baldwin is a biker beauty in a leather jacket and combat boots as she joins Cameron Dallas for lunch at Urth Caffe

They first met on the set of a Carolina Herrera photo shoot in February.
And since then, Hailey Baldwin and Cameron Dallas have appeared to become close, hanging out together on multiple occasions.
And on Friday, the duo enjoyed a meal together at Urth Caffe in West Hollywood. 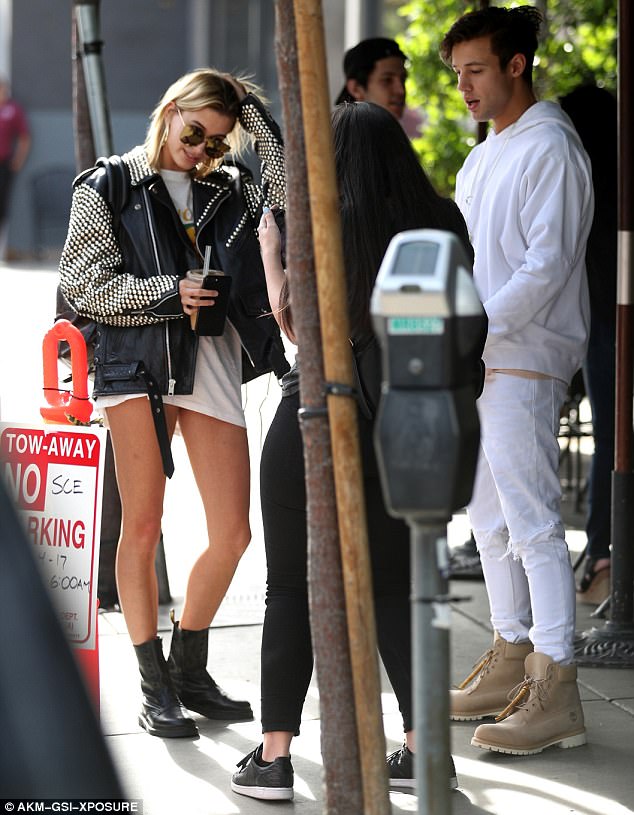 The model layered a Gucci T-shirt underneath a leather biker jacket adorned with studs and zippers.

The blonde stunner displayed her long legs in a pair of combat boots.
Hailey accessorized with a ring, a pair of shades and large gold hoops.

Cameron, who rose to fame on the now-defunct Vine app, looked handsome in a white and beige ensemble.
The 22-year-old was relaxed in a hoodie and jeans combo.
For their lunch outing, the two appeared to be joined by a few other pals.

In February, Hailey and Cameron posed for a Carolina Herrera fashion campaign.
Since then, the duo have followed each other on Instagram.
Rumors swirled that the two have become more than friends. But, they could simply be just pals and on a work commitment to hang out to promote the brand.
Hailey has previously been linked to Justin Bieber, and Cameron has only had one girlfriend in high school, according to a video posted on his Youtube channel.
‘I’ve been in one relationship and that was my junior year, so it’s been a while,’ he confessed.